Happy Fall! ‘Tis the season for your arts & craft Pinterest boards that you have been building for months (maybe even years) to come alive! Dust off the tacky glue and mod podge my friends, it’s time.

To be honest, I think I am the worst Pinterest user out there. I have four boards with one or two pins in each and all I do is browse, hit the heart button and move on. I use Pinterest for ideas and inspirations, just like it’s intended to be used, but I forget to engage in the key feature of the site…..pinning things.

My disregard for “normal” Pinterest usage practices reminds me of an article I recently enjoyed. Many people have their qualms with BuzzFeed, but I generally find their content relevant to the average millennial…and it’s funny. Let me live my life people.

Anyways, I read a post written by Rachel Wilkerson Miller entitled: What Happened When I Lived According to the Pinterest Popular Page. I thought it was such a great way to bring us Pinterest users back down to reality. SPOILER ALERT: many (but not all) of the #ootds, craft projects and hairstyles Miller tried didn’t turn out the way she expected. Some people may say that they were a “fail,” but I’d like to think otherwise. Yes you are probably right in thinking that the upside down french braid is probably the most difficult “quick hair-do” on Pinterest to actually achieve…but I think people forget that everyone’s situation is unique.

The ONE person that posted the original tutorial obviously has the most ideal hair-type to achieve the look. That, and she more-than-likely sprayed her hair with products to get her hair to cooperate. It’s all determinant of the situation, access to supplies and skill. Same goes for the picture-perfect crafts that Pinterest features. What the typical Pinterest browser doesn’t realize is that  most of these popular posts have authors that are skilled in lighting and photography that help make their final products look “picture perfect,” and I say that with no negative connotation. By all means, everyone has a right to share their skills in any shape or form. That’s the beauty of art.

I’m just saying that we, as  average consumers of Pinterest content, need to remember that there’s a lot that we don’t see on the creator-side. Most importantly, we need to remember that any attempt at a DIY project on Pinterest is not necessarily a “fail” when it doesn’t turn out like the picture. Just like you choose the selfie with the best lighting and head tilt to post on Instagram, posts on Pinterest are no different.  It’s okay to have a wonky-looking DIY candle! It’s a testament to your unique skill set and personality. So go ahead and color outside of the lines. Do you Boo Boo!

Side note: So, it seems to be an ongoing trend for me to post a teaser on my social media channels about an upcoming blog and then not post it until weeks later.  SORRY. I get spurts of inspiration and then life gets in the way. I made it a rule for myself to not force myself to post for the sake of timeliness, but to post it when it feels right. Hope you understand ❤

Seeing as it’s mid-to-late November now, it feels like the pumpkin spice latte has been frolicking free through coffee shops worldwide for what seems like a month too long now, BUT I have to give that darn latte some credit for inspiring me to write this post. I saw the pumpkins on TV and I decided that I wanted to craft my way towards that “oooh yay, fall is here” feeling. I am glad to report that it worked, despite the 80 degree weather here in SoCal.  But I still refuse to order a pumpkin spice latte. Bah hum bug right? Wrong holiday? Sorry not sorry.

Growing up, I remember there was a craft for every holiday. For Halloween, it was pumpkin carving. I wouldn’t say I am HORRIBLE at it…but a knife is not my art tool of choice. So this year I decided to try my hand at the non-carving approach. This is where Pinterest comes in. Coincidentally, I had to do creative centerpiece research for a fall-themed work event. While doing that, I stumbled across this pin by the blog simply happenstance and pretty  much fell in love with the idea of taking a plain pumpkin and sprucing it up with a succulent arrangement. I decided that this was it. Then I fell into the Pinterest hole and decided that a bunch of other non-carving pumpkin designs would also live on my porch this fall. The thirst for sequins on a pumpkin was real and I was highly ambitious.

As I continued thinking about the logistics of this project, I came to the conclusion that it would be financially and environmentally irresponsible to buy perfectly good succulents JUST to chop them into pieces to glue onto a pumpkin. I needed a fall decoration that would last me all season. The poor plants would die in a week or so and I would be left with sad pumpkin. No sad pumpkins allowed on my porch. So I opted for fall-colored artificial flowers.

Luckily for me, Michael’s Arts and Crafts store was having a sale on artificial flowers and I went IN. I also bought a few other supplies to satisfy my DIY fever. Sequins included. Everything I bought is pictured below. Granted, I ended up not using all of the supplies, oh well. More supplies for future crafting 😛 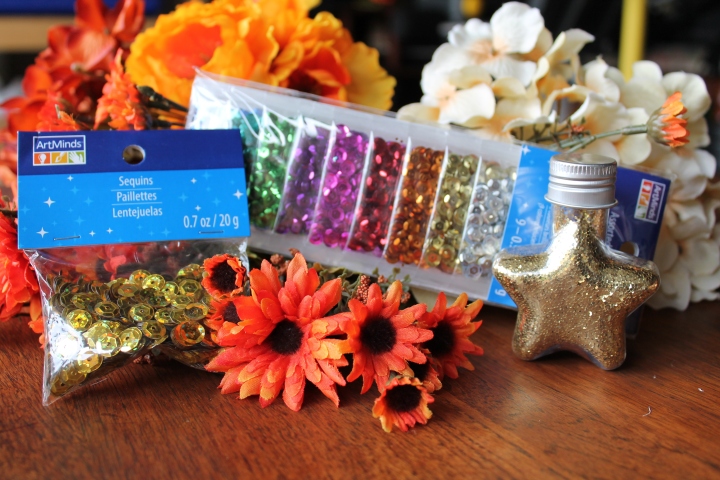 So now that I had supplies, I needed pumpkins. So I recruited my older brother to join me in finding a place that was selling pumpkins this early. Mind you, I made these DIY pumpkins in early October. The pumpkin patches were barely unloading their supply. After finding pumpkins of all shapes and sizes, I was finally ready to just let my creative ideas flow. This was the result:

I cut the artificial flowers to a workable size and used hot glue to secure them to the top. There was no particular method to the arrangement, I just placed flowers where I thought they would look good and ended up with what is pictured above. To give it a personal touch, I used black paint to create a monogram “B,” for the initial of my family name. You can’t really tell, but I also painted all three pumpkins’ stems gold to coordinate with the gold sequins I tacky-glued onto the mini white pumpkin. (I was able to satisfy my desire for a sequined-pumpkin :D)

This is what I mean by using Pinterest to YOUR leisure. I originally intended to make a carbon copy of the pumpkins I saw when I did my research. But I’m definitely glad I ended up with my own version of this trendy fall-themed project…and I think they are ADORABLE 🙂

So keep pinning my friends, just don’t forget the original reason you ventured onto Pinterest: for inspiration, not duplication. Happy crafting! 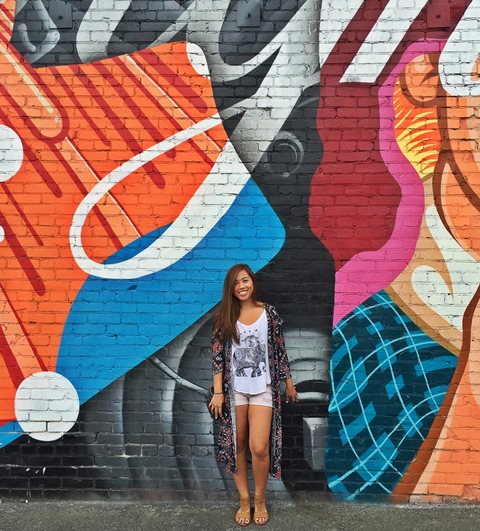